Five Books you must read as a beginner

5 books you must read as a beginner

Not all of us are avid readers since childhood (and maybe some of you can relate to the situations, including me and my fellow bookworm who also had a hard time getting into reading) But over time I have realised that I always come forward and promote reading and really  like it when other people read because it’s so rare for authors to tell such amazing stories. Today I am going to list down five such books that can get you into reading for good and take you into a magical world of stories and characters that stay with you for a long time.

1.The Diary Of A Young Girl

About the book-The Diary of a Young Girl, also known as The Diary of Anne Frank, is a book of the writings from the Dutch-language diary kept by Anne Frank while she was in hiding for two years with her family during the Nazi occupation of the Netherlands. The book is not only written and translated in a simple manner but opens gates for you to understand holocaust and bring a sense of empathy in you as a reader.

2. The Blue Umbrella by Ruskin Bond

About The Book-As soon as Binya saw the beautiful blue silk umbrella, she wanted it. She wanted it so badly that she was willing to give her lucky leopard's claw pendant in exchange. No-one in the village had such a fine umbrella, and everywhere Binya went the umbrella went too. Gradually it faded to a pale blue, and was patched in several places, but there was still many who envied Binya her treasured possession. And the most envious of them all was old Ram Bharosa, the shopkeeper, who decided that by some means he must own the blue umbrella.

About The Book-Little Women is the story of how the four sisters Jo, Meg, Amy and
Beth grow up, find love and their place in the world under the
loving and watchful eyes of their beloved Marmee. The little women
together with their mother keep the home fires burning while their
preacher father serves with the Union army during the American
Civil War. The family struggles to make ends meet, with the help
of their kind and wealthy neighbour, Mr. Laurence, and his
high spirited grandson Laurie.
The book shows how in all times, love and hope are the most
faithful companions when all else fails. Honest and true intentions
are really the most valuable possessions one can have. The novel
emphasises the beauty of simplicity and the importance of small things in life. This book is also available in public domain as its been 100 years to when the first the book got published.

4. No Time For Goodbyes by Andaleeb Wajid

About the Book-2012,  Bangalore. Sixteen-year-old Tamanna finds an old Polaroid photograph in the attic and stumbles into her mothers past.

It is 1982. Tamanna finds herself in her grandmothers house where her mom seems to be younger than she is. She also meets her grandmother, aunts and Manoj, her mother’s charming neighbor. Manoj’s granddad is a scientist working on time-travel but he seems pretty clueless about getting Tamanna back to the present. Even as Manoj helps Tamanna sort out the mess that she’s in, they fall hopelessly in love. How will the impossible attraction ever work if Tamanna has to return?

5.The Palace Of Illusions by Chitra Banerjee Divakaruni

About the book-A reimagining of the world-famous Indian epic, the Mahabharat—told from the point of view of an amazing woman.

Relevant to today’s war-torn world, The Palace of Illusions takes us back to a time that is half history, half myth, and wholly magical. Narrated by Panchaali, the wife of the legendary Pandavas brothers in the Mahabharat, the novel gives us a new interpretation of this ancient tale.

The novel traces the princess Panchaali's life, beginning with her birth in fire and following her spirited balancing act as a woman with five husbands who have been cheated out of their father’s kingdom. Panchaali is swept into their quest to reclaim their birthright, remaining at their side through years of exile and a terrible civil war involving all the important kings of India. Meanwhile, we never lose sight of her strategic duels with her mother-in-law, her complicated friendship with the enigmatic Krishna, or her secret attraction to the mysterious man who is her husbands' most dangerous enemy. Panchaali is a fiery female redefining for us a world of warriors, gods, and the ever-manipulating hands of fate.

These contemporary and classics together will also help you determine the genres you can choose later and help you make it a part of your daily or occasional reading.

This Blog Post is written by Sukaina Majeed,on behalf of My Secret Bookshelf.

Popular posts from this blog 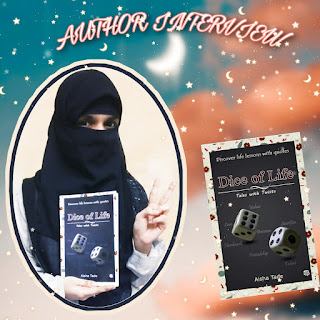 🌺🌺🌺🌺🌺🌺🌺🌺🌺 Today, I had the pleasure of interviewing the author Aisha Tade. She is a young, talented and enthusiastic author. Besides being an author, she is a bright student of Microbiology under Mumbai University. Her debut book, “ Dice of Life” is a contemporary fiction. It is a very  interesting book of tales which comes along with twists in each of them. If you haven’t read it then you must definitely go for it. Our interview has been summarized below : 1. Can you briefly introduce yourself 🌺 I am actually a small town girl who always wished to achieve more and more in her academic performances. One can say, a kind of a boring personality from some perspective, but a typical  "Chupa Rustom" who has a lot in the mind. I am born in Mumbai and brought up at Raigad district, Maharashtra. My world just used to revolve around my family and school-college friends until this lockdown hitted. After which, I discovered an author in myself. I used to write quotes and po
Read more 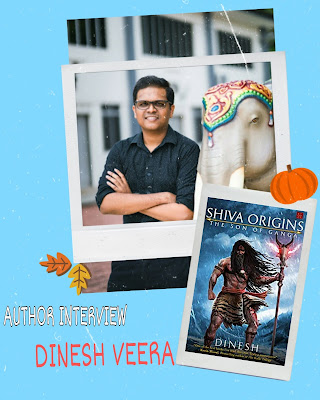 1. Can you briefly introduce yourself   💫 Hello! My name is Dinesh Veera. I am a 29 year old medical doctor, mythological story teller and yoga enthusiast. 2. As a child, what was your aim ?  💫 To be very honest, I wanted to a superhuman with superpowers. But as I grow, I understood that its not going to happen.  3. Did your parents support your career in writing?  💫 Not really. My father still thinks that I am wasting my time by writing novels. He wants me to use that time to advance in my medical field.  4. Which is your favourite genre and why ?  💫 Mythology because its full of creativity and imagination.  5. What made you to write this book?  💫 The deep interest to share my knowledge about Yoga and Indian Mythology in an engaging way to our Indian readers, made me to write this book. 6. How long does it take you to write a book ?  💫 It depends on the type of the book that one is writing. A complicated book such as Shiva Origins will easily take between 2 to 3 years to complet
Read more 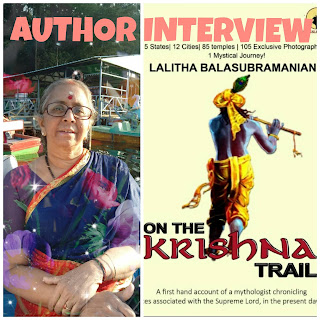 🌺🌺🌺🌺🌺 I had an interview with the Author Lalitha Balasubramanian who has written the book On The Krishna Trial. Our conversation has been summarized below : Q1. Can you briefly introduce yourself?   💫 I am Lalitha Balasubramanian, a Mumbai based author and freelance Journalist. My articles related to health, education and travel have been published in various newspapers and magazines of repute. I have been writing books since the past few years and have been published in two genres, religious and mythological travelogues and children’s fiction. ‘On The Krishna Trail’ is my fourth book in this genre. When I am not writing, I am generally reading, listening to music, or having joyful trysts with nature.      Q2. As a child, what was your aim?   💫 My aim as a child was to just have fun and enjoy every moment. I never actually thought about the selection of a career. But I have always been a voracious reader and a self professed dreamer.     Q3. Did your parents support your car
Read more